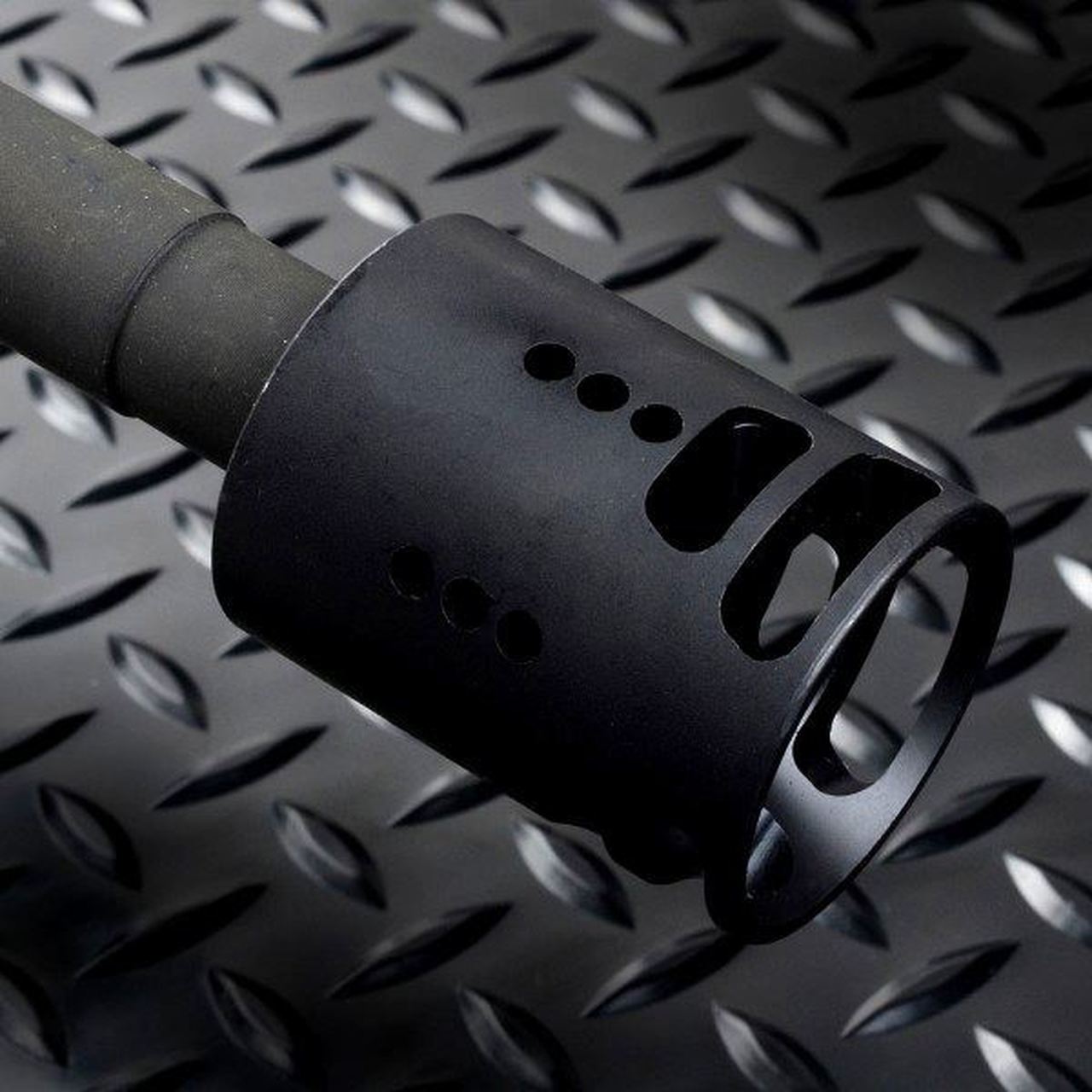 Update 4 29 2020: There is a considerable noticable reduction in recoil, compared to a rifle with nothing mounted to the end of the barrel. I initially though it was my imagination, or I just got way tougher while staying at home due to the COVID crisis. Well it turns out I am in no way shape or form tougher, and there is actually a 34% reduction in recoil. Somebody has done the experiment…and recorded the data. If you are interested in reading the experiment, click here.

They are meant to work with Strike Industries Cobra Dummy Suppressors, and will fit inside most free float handguard rail systems, as well as directly attach to any AR barrel with a 1/2”x28 thread pitch. They are machined from steel, and feature a mate black finish.

First impressions were good. It’s matte finish is nice, and the quality of the machined steel is very good. Installation onto my AR barrel was straight forward, and the fitment very good. The price of a Fat Comp, is a fraction of other higher priced compensators for very comparable performance. I also managed to achieve the look i wanted. Aesthetic and effective for a great price

Although its a compensator and not a brake, the FAT Comp 2 reduces recoil by 34%

The Price is Right Jack

The Fat Comp 2 is an incredible value for the quality and performance as a compensator, but also at reducing recoil. You'd be hard pressed to find nearly as good a bargain with another product.

Reason #1: Cost Savings
If you are looking to save money, it will take some volume before you really benefit, but you’ll be able to develop and load high end rounds for cheaper than you could buy them. Range finds, and buying things in bulk or on sale can make reloading ammo more cost effective than store bought ammo. However, cost shouldn’t be the only focus of reloading.

Reason #2: Precision Ammunition
You can produce more accurate, and consistent ammunition, versus off the shelf ammunition.

Reason #3: Availability
You can produce a specialty round that isn’t commonly available, or create a round that is in low supply at retailers

Reason #4: Freedom
If you live in California, you can avoid the ammo background checks and fees. (This is a big perk for me in California, where legislators and idiots are constantly trying to take away or infringe 2A rights). Background checks add to the cost of ammunition, and upfront fees to buy ammo from a store you aren’t on record already is an egregious 20 dollars.

My Big Game Hunting Round. Used for examples below.
I experimented with powders, seating depth, and settled on a load for my 270. It’s a 140g Barnes TSX, doing 3100+ fps and around 3000FPE at the muzzle. It doesn’t recoil badly, isn’t even the hottest load I could run, and is producing accurate results. When I put a highend name brand round with similar ballistics through a chronograph, it performed over 300fps slower than advertised. So even when you pay for a premium round, you may not be getting ammo that is nearly as good as you could create.

Equipment Cost Breakdown(All Available in one stop at Brownells)

I bought stuff on sale, price shopped a couple other places, even 3D printed stuff, and got all of the above for $172.65.

So for a ‘specialty’ lead free hunting round, my reloaded ammo cost a little more than half that of a commercially available round, but I can be assured of performance, and quality.

My example focused mostly on a centerfire hunting round, that uses premium bullets and a magnum rifle powder, and not bulk shooting rounds. For bulk reloading it’d be wise to read what you can about a turret press, which is faster at creating bulk ammunition, than a single stage press would be. Reloading ammo in smaller calibers like 5.56/223 could be much cheaper, based on powders, and the use of copper jacketed lead bullets.

If you are on lock down because of the Coronavirus, why not load a few thousand rounds.

In restricted states, where they have passed background checks and fees, on ammo purchases. You can reload almost whatever you'd like, in whatever volume you'd like.